Hino 700 2845 READY FOR THE NEXT MILLION KILOMETRES 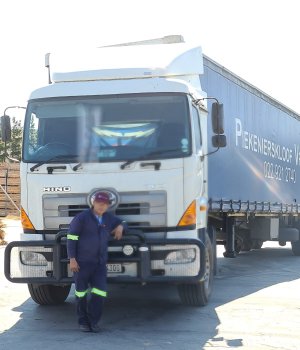 A Hino 700 2845 operated by Heidedal Boerdery/Piekenierskloof Vrugte, situated on the Piekenierskloof Platea, near Citrusdal in the Western Cape is ready for the next million kilometres according to company owner and managing director Oubaas van Zyl and the truck-tractor’s dedicated driver, Andre Romburg. The Hino, which was bought new at Citrusdal Hino in March 2009, clocked up the million kilometres in September 2020.
The main route travelled by the Hino, pulling a 30-ton tri-axle trailer, is from the farm to Cape Town harbour for export of citrus, nectarines, peaches, and apricots.
The important fact about this achievement is that it was achieved with only regular servicing and the replacement of items such as batteries, compressed air pipes, brake linings and the like. No major work was required on the engine, gearbox, propellor-shaft or rear axles during this period.
This was the first Hino bought by this farming enterprise with its major attributes being reliability of the truck and excellent service from Citrusdal Hino, according to the owner.
“The cost per kilometre of operating this truck is still very acceptable considering that major costs during the period it clocked up a million kilometres have been limited, basically, to servicing and tyre replacement, so it will remain a mainstay in our fleet,” added Van Zyl.