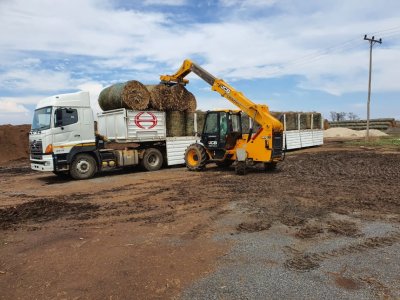 Hino trucks are playing a vital role in assisting farmers in need in the Vanwyksvlei region of the Northern Cape. This area has not had rain for eight years and at least 13 farms have been abandoned due to the worst drought in 50 years. Many of the people living in this region are emerging farmers who do not have the resources to keep farming in long periods without rain so they are very grateful for the fodder the trucks are bringing to their region.
Two of Hino SA’s driver trainers, Zenzele Mafokate and Joseph Peme, take turns to drive the Hino 700 2845 link combination with 56-ton GVM. Each trip to Vanwyksvlei takes about 18 hours, going via Kimberley. Both Hino SA and Hino East Rand contributed towards the running costs of these trips.
The key people arranging the transport and distribution of this much-needed fodder are Nick Vlok, the former CEO of Digicore and Dominee Deon van der Walt, while Garth Middleditch, a key accounts executive at Hino East Rand, is involved in liaising the Hino involvement in this joint effort.
“We are very supportive of this project to help farmers in need and glad that this support extends to our dealers and customers,” commented Pieter Klerck, General Manager of Hino SA.