The Volvo FMX celebrates 10 years of driving in harsh conditions 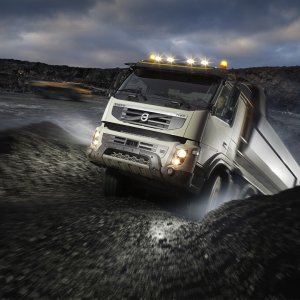 In 2010 Volvo Trucks introduced the Volvo FMX – a truck specifically developed for the demanding construction industry. Its ability to cope with tough conditions has evolved over the years as a result of the introduction of many innovative features. After a decade in the mud, it has a solid reputation as one of the toughest construction trucks on the market.

“The Volvo FMX was a game changer and it soon became very popular among both haulage operators and drivers,” says Eric Parry, Product Manager at Volvo Trucks Southern Africa.

Designed for rough road conditions
The robust modern exterior of the first Volvo FMX, which clearly showed the truck’s relationship with Volvo Construction Equipment machines, was an attractive feature. The functionality of the Volvo FMX included a strong towing eye, headlamp protection, new anti-slip steps and a handy ladder. With a three-piece steel bumper, corners made from 3-mm-thick steel, a solid crankcase protection plate and a protective bullbar, this was a sturdy construction truck.

The tough got tougher after only three years
Only three years after the introduction of the Volvo FMX, Volvo Trucks released a new version. The cab was modified and all the components in the front structure were redesigned. New air suspension gave an increased ground clearance of 300 mm. The towing eye could now tow up to 32 tons.

“We were encouraged by the immediate success of the Volvo FMX, so we launched a new version as early as 2013. It was an even more robust solution for challenging construction environments,” adds Mr Parry.
Volvo Dynamic Steering – effortless and precise driving
In that same year, Volvo Dynamic Steering was introduced in various markets around the world, unfortunately this has not been available in Southern Africa as of yet. This feature, another patented technical innovation, which made it possible to drive a truck with minimal effort. Volvo Dynamic Steering combines conventional hydraulic power steering with an electronically regulated electric motor fitted to the steering gear.

“The steering system is perfect for a construction truck. At low speeds, it makes steering effortless and precise, and removes the strain on the driver’s arms and shoulders. This means improved safety and a reduced risk of occupational injury,” says Mr Parry.

I-Shift gearbox for heavy loads
The construction version of the leading Volvo I-Shift gearbox allows the Volvo FMX to handle tough and hilly terrain with high levels of productivity and driver comfort. In 2016 Volvo Trucks introduced I-Shift with crawler gears, which enables the truck to pull away from a standstill with loads of up to 325 tonnes. It also allows truck operators to drive at speeds as low as 0.5 km per hour – a huge help during precision manoeuvring.