HINO TAKES A GIANT LEAP WITH ITS 2022 DAKAR RALLY CONTENDER 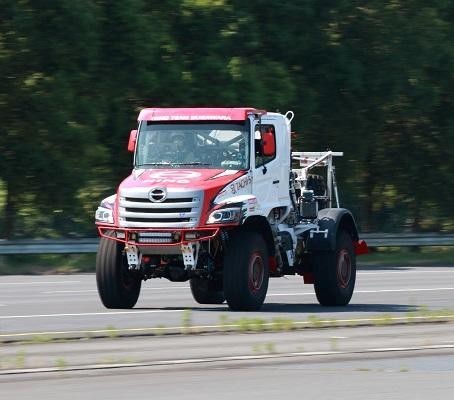 Hino Motors, a regular competitor in the gruelling Dakar Rally since 1991, made a dramatic announcement recently in that it intends to race a diesel-electric hybrid truck in the 2022 event. This means that will be challenging the so-called “monster trucks,” with engines of more than 10-litre capacity, for outright victory in the category with a truck fitted with a hybrid power unit producing 794 kW (1 065 bhp).

This is a big leap from the 550 kW (738 bhp) that was available from the 9-litre turbocharged diesel engine fitted to the Hino 500-Series 4×4 for the 2020 Dakar Rally in Saudi Arabia. The hybrid power train has been fitted to the bonneted version of the Hino 500-Series, known as the Hino 600-Series and sold only in the United States. One of these models took part in the 2020 Dakar Rally with a regular diesel engine but had to retire with a damaged roll-over bar after a crash.

The high-tech 2022 project is being driven by long-time Dakar entrant, Hino Team Sugawara, with its leader, Teruhito Sugawara, being the person who will be behind the wheel of the hybrid truck in the Dakar Rally, which will take place in Saudi Arabia from January 2-14, 2022. The development and test programme are already well advanced as Hino prepares for its 31st Dakar Rally.

“Up until now our hybrid truck has been built and developed by a well-qualified and experienced team of engineers and technicians, under a cloak of secrecy and will only debut on the 2022 Dakar Rally,” explained Teruhito Sugawara who has competed in the past 22 Dakar Rallies. He has only finished out of the top 15 overall twice in the 17 years he has been a driver, after previously navigating a Hino driven by his father.

Hino has already won the truck category in the Dakar Rally outright, but this was way back in 1997 when the 8 015 km route in Africa went from Dakar, in Senegal, to Agadez, in Niger, and then back to the finish in Dakar. Three Hino 500-Series took first, second and third places overall in this event, a feat that was only equalled by Kamaz in 2011 and repeated by the same Russian truck in 2013.

At least one Hino has finished every Dakar the brand has contested since 1991, building up an amazing 30-year record for durability and reliability in the process. Hino is still the only Japanese truck manufacturer to tackle the Dakar Rally on a regular basis, always facing a strong field of Western and European trucks.

The 2022 Dakar Rally will mark the 44th edition of this gruelling cross-country endurance event, and it will be the third time it will take place in Saudi Arabia. The organisers say that 80% of the route will be different from previous events in this country. The Dakar will start in Ha’il on January 2 and finish in Jeddah on January 14, with a rest day in Riyadh on January 8.