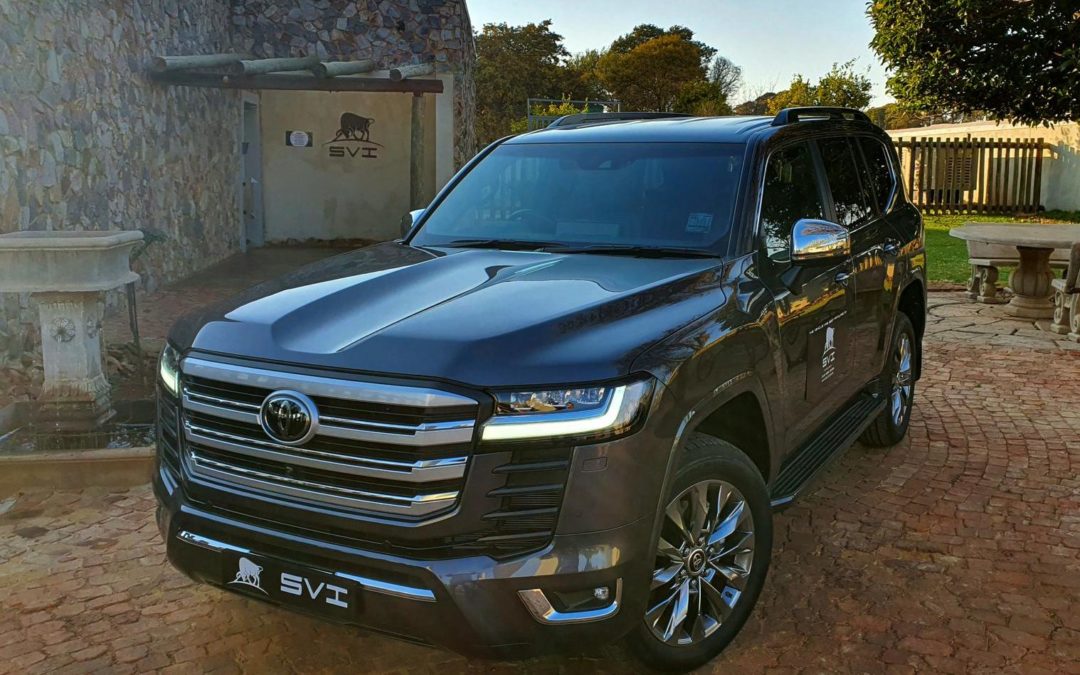 SVI Engineering, specialist manufacturer of armoured products, took delivery of one of the first Land Cruiser 300s to enter the South African market. According to Jaco se Kock, CEO of SVI, it was important to purchase an early example of the Land Cruiser 300 to give his engineering team adequate time to develop the B6 (assault rifle) armouring kit before the bulk of the allocation arrives on local shores.

The Land Cruiser 200 was one of the most popular armoured vehicle models for SVI and the 300 is destined to take over the batten. Now lighter and with more power and torque (305 kW and 650 Nm in the case of the ZX 3.5T) than the previous model, the Land Cruiser 300 is even better suited to VIP armouring needs in both petrol and diesel formats.

Engineering process
As the Land Cruiser 300 is an all-new vehicle; SVI will have to strip the cabin down to the bare metal to measure up the available space for armouring. This is done by a 3-axis, measuring arm as well as a 3D scanning tool to create a computer aided design (CAD) model of the vehicle.

Toyota has used a high percentage of aluminum in the 300 which include the doors in order to save mass. SVI’s ultra-light,  high-performance, composite materials will be utilised to limit the mass addition in critical areas while stopping the rounds fired from AK47, R5 and R1 assault rifles.

. SVI predicts that the development process will take around 2 months to complete. Production will commence after validation of protection and performance of the first unit. The conversion time for production units is estimated at 3 months. The end result will be a discreetly armoured vehicle providing maximum ballistic protection to the occupants while retaining the core 300 qualities.

B6 Armoured Specification
B6 is the highest level of civilian protection allowed without a special permit and has been designed for the valuables-in-transit industry as well as high-profile individuals needing the ultimate level of protection which is the case with the Land Cruiser 300. This has been designed to protect against the ammunition fired by the AK47 and R1 assault rifles. This comprehensive protection comprises 38mm armoured glass and special armoured steel plates in combination with composite materials. Due to the additional mass prediction of around 600 kg, the suspension will be upgraded accordingly.

Cost
The final cost of the armouring package still needs to be determined at the end of the development process but SVI expects a price of around R 900,000 excluding VAT for the 360-dgeree B6 armouring solution for the Land Cruiser 300. SVI is starting to take customer orders for converting the 300 which is expected to commence at the end of the year.

The company
SVI was formed in 2004 as an innovative mechanical engineering firm specialising in armoured vehicles. The company is a market leader in Africa serving the individual, corporate, security, mining and governmental markets. SVI is BEE level 2 and its quality management system is certified to ISO 9001:2015 by TÜV Rheinland.