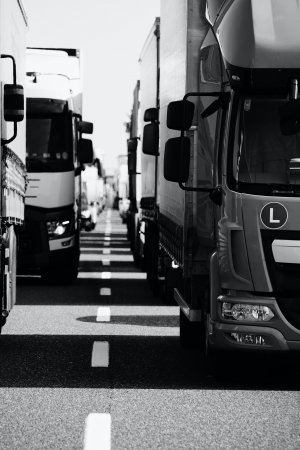 Over the last few weeks trucks driven by foreign nationals have been subject to violent attacks. One driver was murdered this week which propelled the issue to the forefront of many minds. The government has assembled a task team to investigate the issue and propose strategies to prevent violence being perpetrated against drivers.

The managing director of MasterDrive, Eugene Herbert, says it has been a sad period for the trucking fraternity. “We are saddened by the reaction of some parties who have fuelled the problem. We would like to see authorities protect the lives of the truckers who are doing their part in getting the economy on track.

“There is need for greater police presence and strategies to protect the drivers from the violence inflicted by criminals. South Africa is trying to recover from the economic strain of lockdown and can ill-afford further disruptions. Additionally, no driver should fear for their safety as they create an income for their families. During lockdown level four and five, they were one of the groups ensuring South Africa continued functioning and government and society should commit to their safety.”

Certain companies are leading the way in which South Africa should deal with the threat to truck drivers. “We commend the companies who place the safety of their employees high on the list of priorities specifically when they have not neglected their normal health and safety standards by continuing to equip drivers with the skills needed to deal with other challenges.”

The events of the past few weeks have also illustrated the need to prepare truck drivers for whatever scenario they encounter on South African roads. “Not only should freight companies give employees the skills to be safe and competent drivers but also provide them with training on what to do should they find themselves in a dangerous situation.

“It is possible that knowing what to do when faced with a threat could mean the difference between life and death and any company that has the power to equip their drivers with this knowledge should seize the opportunity. While this is not a guarantee of safety, as many of the attacks appeared to specifically target the driver, it is nonetheless a step in the right direction.”

The attacks on truck drivers is an event South Africa should look upon with great sadness. “In the coming days we hope to see a concerted effort made to protect truck drivers. MasterDrive shares their sincere condolences with the family of the driver who lost his life,” says Herbert.

About MasterDrive
MasterDrive is a results-driven, driver training organisation that engages with and assists companies in managing driver risk interventions.

The company was established in 1999 and became part of the RAC Group (established in 1997) some 9 years later – in 2008 – and has expanded its field of operation to cover the African continent with dedicated branches in SA’s three main centres.

To that end MasterDrive has a dedicated team of professional, internationally accredited instructors who deliver training on a range of programs that encompass the full spectrum of vehicles – from motorbikes to cars to busses and trucks.

In addition to delivering internationally proven defensive driving courses the company also offers training required by legislation – dangerous goods and forklift – bespoke courses are also available to corporates and emergency services, all with a view to changing and developing driver behaviour.

The company’s proven track record with a number of SA’s top 500 companies ensures that it is a viable operation providing a platform for rolling out its own BBBEE transformation program that contributes toward the wellbeing of all South Africans.

MasterDrive also boasts a proud record of supporting a number of NPO’s whose drive is to educate road users on safety and so enhance the profile of changing behaviour by whatever reasonable means it can promote and offer. These include, but are not limited to, Psychometric assessments, on-road assessments and corporate safety events.

Our Why is summed up as follows:
Making a difference, one day, one kilometre, one life at a time!!!