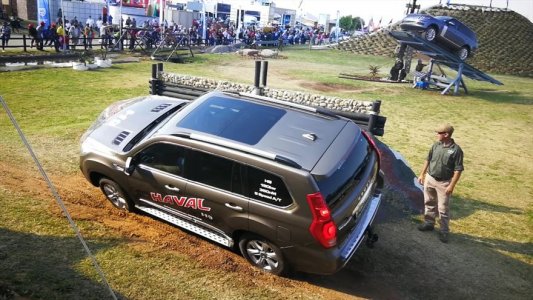 Annually South Africa’s agricultural community makes their pilgrimage to Bothaville a small town in the Free State province of South Africa to attend the ever popular Nampo Harvest Festival. Haval Motor Southern Africa once again teamed up with their dealer in the area, Haval Klerksdorp owned and operated by Agenbag Motor Group, to showcase the latest range of Haval SUV models and Great Wall bakkies.
Grain SA’s NAMPO Harvest Day is one of the largest agricultural exhibitions under private ownership in the southern hemisphere. The first NAMPO Harvest Day was held in 1967, on the farm, Donkerhoek, near Bloemfontein and was attended by 200 producers. Thereafter the Harvest Day was held on various farms until the size of the event started necessitating a more permanent venue. In 1974 the NAMPO Harvest Day was therefore established on a permanent terrain outside Bothaville, which is today known as NAMPO Park. Products and services that are displayed by the more than 750 exhibitors, establish the NAMPO Harvest Day as a diversified trade exhibition.
An important facet of the NAMPO exhibition is the motor industry displays. Manufacturers from all over the world bring their offering directly to the people by showcasing their offerings from passenger cars to trucks and everything in-between. Haval GWM showcased the whole range from the Haval H1 SUV to the top of the Haval range Haval H9. GWM was well represented with a full range of bakkies as well as a modified game viewing vehicle that gained much interest from the crowds of interested show goers. The brands were extremely well received with customers waiting patiently to engage the product specialists and sales people on hand due to the bustling and busy Haval GWM stand. The mighty Haval flagship, the H9 was put through its paces in front of hundreds of interested on lookers on the purpose built 4X4 obstacle course and the brute of luxurious travel in the Haval range lapped up the obstacles with ease.
Word is definitely getting out that GWM and Haval are both the best option on South African roads when you are looking for a value proposition combining safety, specification and price when in the market for purchasing a new SUV or bakkie. Testimony of this is the fact that the Chinese manufacturer recently surpassed the 800 retail monthly units sales mark and has held this upward trend since and added to this, has grown from a mere 3 retail outlets to a massive 46 fully fledged state of the art dealerships country wide.