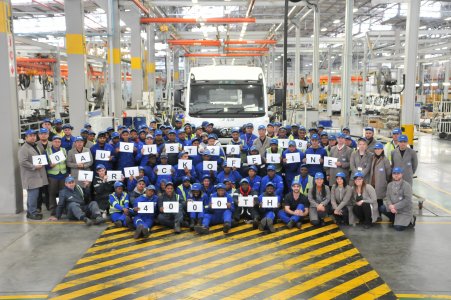 FAW South Africa’s world-class Coega assembly plant recently celebrated another production milestone: assembly of the 4 000th FAW in South Africa.
With a presence in South Africa dating 24 years, FAW’s assembly plant has become the bedrock for further investments in the Eastern Cape. Inaugurated in July 2014, the plant was the first large-scale investment made by a China-based company in the region. In fact, it is still one of the largest foreign direct investments ever made in Coega.
FAW’s R600 million plant currently provides employment for 120 people on a permanent basis, contributing positively to the overall unemployment rate in the province. Some 951 training hours have been completed year-to-date, with the training provided focusing on health and safety as well as skills development.
Several health and safety practices are monitored and enforced at the site. In fact, since the plant’s opening in 2014 the facility has an enviable health and safety record. Each assembly station has been ergonomically designed for optimum employee work efficiency to ensure optimum employee well-being. No fewer than 89 innovations and improvements have been implemented at the plant in recent years with the majority of these innovations and improvements proposed by the assembly staff.
Furthermore, FAW SA has developed and incorporated numerous policies and procedures to ensure effective waste management at the plant. FAW SA prides itself on ensuring that the plant operates according to the environmental standards put into place by the Coega IDZ.
The plant has increased production to include almost all FAW commercial vehicles sold in the sub-Saharan region today. It has produced 1 061 vehicles in the past 13 months alone (averaging 81 vehicles a month), which are either sold locally or exported into Southern Africa. FAW SA has a rigid quality control procedure all vehicles must pass before these vehicles are given the green light. No less than seven quality check-points are in place to ensure that all vehicles that roll off the production line are of the highest build quality.
To date, a total of 16 different models have been assembled at the plant in Coega, ranging from the ever popular 8.140 to the landmark vehicle, a 420hp FAW 33.420FT truck tractor, which is the newest model in the company’s extra-heavy commercial vehicle range and is the successor to the popular FAW 28.380FT.
Total FAW exports reached 159 units in 2016, which rose to 212 units in 2017, establishing FAW as the second largest commercial vehicle exporter in South Africa. This is further testament to the brands promise to build quality vehicles in South Africa for Africa.
Customer demand for locally built FAW trucks meanwhile has increased exponentially in the last three years, primarily due to their assembly quality and speed to market. And the brand set a new total sales record in 2017, despite the tough economic environment.
What’s more, FAW SA is committed to social responsibility and wants to keep working with the Coega Development Corporation (CDC) and surrounding communities in Coega.
To this end FAW – together with the CDC – recently donated about 400 pairs of school shoes to the Coega Primary School, which is located in Wells Estate, Port Elizabeth. All of this is further proof of the brands commitment to the country and continent.