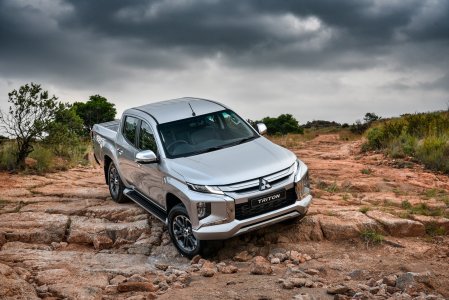 Nampo, the biggest agricultural show in the southern hemisphere, shares a not-so-surprising characteristic with the latest version of Mitsubishi Motors South Africa’s “Engineered Beyond Tough” 2019 Triton.

Engineered to be tough enough for anyone or everyone, the all-new 2019 Mitsubishi Triton was at the Nampo show, the agricultural gathering developed beyond tough for local farmers, their families and their workforce. Visitors were able to experience the bakkie on the 4×4 track with a 4×4 instructor putting it through its paces so that potential buyers could see its potential when driven to the extreme.

Hosted in the Free State town of Bothaville in the middle of May, the 2019 Grain SA’s Nampo Harvest Day offers the latest and best in the farming community, including the all-new Mitsubishi Triton.

Apart from the Triton, Mitsubishi Motors South Africa recently also launched the Eclipse Cross and the Pajero Sport, which was a finalist in the 2019 AutoTrader SA Car of the Year competition.

All these cars and the rest of Mitsubishi Motors South Africa’s entire range were at Nampo for visitors to experience their ability, quality, durability, affordability and performance. One outstanding feature of the Mitsubishi range is that the complete range offers a high level of specification with a lot of added value so that buyers are not forced to pay extra for features such as leather seats, sunroof or sound and various other electronic systems.

The all-new 2019 Triton, the Pajero Sport and the Pajero SWB (short wheelbase) werel available to take you through their paces on the dedicated 4×4 track, and the all-new Triton with its tough new look is expected to be in high demand – especially for farmers who would like to experience its new 6-speed automatic transmission, its latest state-of-the-art Super Select II 4WD system, as well as its Electronic Off-road Assistance system.

“The tough-looking Triton with its bold new looks is significantly more competitive and meets the diverse needs of not only bakkie customers around the world, but also the demands of hard-working farmers all over the country,” says Nic Campbell, General Manager of Mitsubishi Motors South Africa.

“This year Mitsubishi Motors is celebrating its 40th year of building bakkies, and the latest development of the Triton features a host of enhancements and refinements making it even more durable and reliable for agricultural users, allowing them the comfort and ride they deserve.”

The Nampo Harvest Day was incepted way back in 1967 and has since then served the requirements of users as well as suppliers and manufactures of agricultural equipment.

Practical demonstrations of usable machinery are some of the most important highlights of the event, as were test drives of Mitsubishi vehicles on the off-road track.