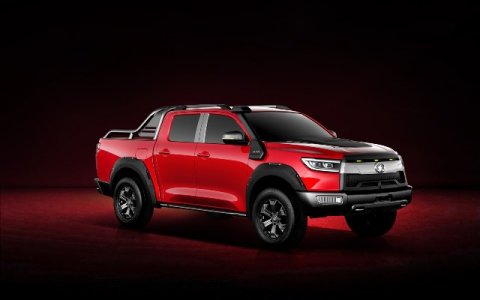 On April the 2nd, Great Wall Pickup officially revealed that their all new pickup series would be launched at the Shanghai International Automobile Industry Exhibition on April 16th 2019. Great Wall Pickup also released two official pictures of the off-road version and said that this all new off-road pickup will be equipped as standard equipment with off-road specific configurations such as a front winch, three differential locks (front, middle, and back) as well as a snorkel, parts and features that are normally aftermarket accessories with most brands.
According to the official pictures, this off-road pickup adopts a totally new design style and looks very tough, robust and aggressive. The new vehicle is equipped with a matte black off-road kit which includes a blackened grille, wheel arches, snorkel and other components to add to its aesthetic appeal. The upper part of the wheel arch exposed-type rivet, thus further enhancing the tough temperament of the vehicle.
The most eye-catching feature is the decorative panel on top of the hood which looks like the aerodynamic ducts commonly seen in American muscle cars and greatly enhances the performance stance of the nose of the truck. To further highlight performance, the new vehicle adopts a black faveolated grille, while a thick grey plaque goes across the entire grille with blackened LED headlights on both sides of the grille. In terms of colour, the nose of this off-road pickup is silver and black at a glance and the colour contrast design makes the whole front end look cool and super aggressive.
The taillights also adopt full LED lights, finishing off the rear to match the front end of the truck. A large blackened panel is added to the tail door panel and as seen from the picture, the cargo body is equipped with ramp ladder slot, so that the ladder can be easily attached to the tailgate to load and off load cross-country motorcycles and other leisure vehicles.
It is reported that the all new product series will be manufactured at Yongchuan Plant, a new production base of Great Wall Motors in Chongqing based on a totally new platform of Great Wall Motors. According to the previously posted patent drawings, it is speculated that there will be several models in the new series of Great Wall Pickup. At this stage only the off-road model images have been posted but we will continue to share information of other models once we get them. Exciting times to say the least!