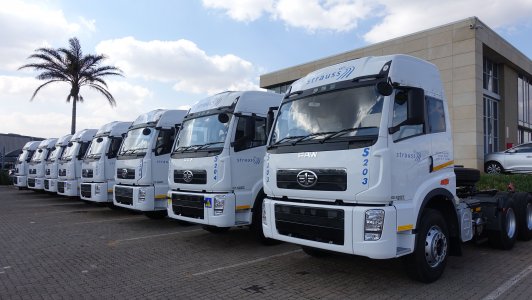 The truck tractors were sourced and supplied by FAW South Africa, having been assembled in the company’s world-class Coega plant in the Eastern Cape. The units were driven to Johannesburg recently where bull-bars and flat-deck trailers were fitted before they were taken to Harare for licensing and registration.

The FAW trucks will be used by Strauss Logistics to transport general cargo from Durban right up to Kolwezi in the DRC and are expected to travel in excess of 100 000km per year. Additional trucks in the company’s fleet will operate on the Beira Corridor which links Mutare in Zimbabwe to Beira and Tete in Mozambique.

This is the first time Strauss Logistics has bought FAW trucks, having originally relied on a number of used European and North American brands to haul Chinese-sourced fuel tankers throughout Zimbabwe, Zambia and Mozambique.

Zimbabwe’s Strauss Logistics is a leading road and rail distributor of petroleum products in Central and Southern Africa. The company was established in early 2010, having started as a trading company which outsourced its transport needs to third parties.

Darren Da Silva, chief operations officer at Strauss Logistics explains that he travelled extensively to China to witness the production of the company’s tankers, some of which were custom designed for Strauss Logistics. He subsequently adopted a positive view of Chinese manufacturing and design.

The FAW brand was later recommended to him by Choice Diesel Mozambique’s managing director, Wayne Greenwood. Choice Diesel became a full FAW sales and service dealer in Mozambique in August this year.

While FAW is ably represented in Zimbabwe, Strauss Logistics is a long-standing customer of Choice Diesel Mozambique and the 44 truck deal stems from the close working relationship the two companies have shared and benefitted from over the years.

During this time, Strauss Logistics has proven itself to be a reliable, premium entity that complies fully with the strictest standards dictated by the fuel distribution industry. An ISO-approved company, it is also registered with the Environmental Management Agency in Zimbabwe and is German certified in OHSAS 18001/2007, ISO14001/2015 and ISO 9001/ 2015 standards.

It is a major player and specialist in the SADC region, where experience and contacts play a leading role in turnaround times: a round-trip from Durban to the DRC and back can take around 38 days! This makes driver comfort a leading concern. Visibility of the trucks is also

vital, and so it’s no surprise that each tractor and trailer in the fleet is equipped with a vehicle tracking device.

Strauss Logistics will soon commence with dry bulk and general cargo transport, hence the decision to purchase the FAW 33.420FT’s. The company has ambitious growth plans and foresees a fleet of 250 trucks being used to transport general cargo throughout SADC by 2020.

“There is a new political and economic environment in Zimbabwe,” enthuses Da Silva. “Commodity prices have risen and there is decent work in the DRC. We were looking for new vehicles and had bought from Choice Diesel before. The company introduced us to FAW, telling us they are the brand of the moment,” he explains.

Before taking delivery, Strauss Logistics’ drivers travelled to South Africa for driver training. He thinks it is important that truck brands train their drivers and their workshop staff, something that FAW SA is continuing to do nationwide.

“Training is a big thing for us. We were happy to hear that our drivers needed to come to Johannesburg for training. We have our own in-house driver training and reward our best drivers monthly. No other manufacturer suggested we bring our drivers for training before they jumped in,” he says.

“Furthermore, we needed a truck supplier that had stock and parts available – in Southern Africa – and was therefore truly capable of serving all our needs promptly,” Da Silva says.
Strauss Logistics operates a large workshop in Harare, which will be audited by FAW SA, as part of its efforts to standardise and benchmark its dealers throughout the region. A number of processes in the workshop have been automated and digitised, Da Silva points out.

Reflecting on the FAW 33.420FT’s he says: “We took a deliberate decision to find an engine (Weichai) that is proven, durable and that has minimal electronics and sensors. We also appreciate the rugged suspension fitted to these models.

“Product aside, all of this is really the result of the excellent relationships we have with Choice Diesel and with FAW SA. This purchase is, in fact, about people. We wouldn’t have been able to do this without that trust,” he concludes.