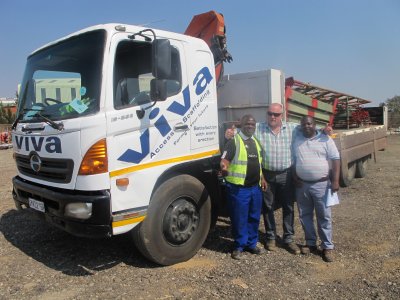 Two, 2005-model Hino 15-258 freight-carriers have moved more than 100 000 tons of steel scaffolding over the past 12 years. During this time one of them has covered nearly 900 000km and the other more than 500 000km. As a comparison, 100 000 tons equates to the mass of a huge cruise liner capable of carrying 3 000 passengers and 1 000 crew!
Importantly, both the Hino trucks have their original engines, gearboxes, and rear axles, with no major repairs required by any of these components. The engines do not even require top-up oil between 10 000km services. Both trucks are still fitted with the original load boxes, which are in good condition considering the rugged type of usage to which they are subjected
The trucks, which are operated by Midrand-based Viva Access Scaffolding, usually work six days a week transporting steel scaffolding components to building sites all over Gauteng, and sometimes in neighbouring provinces too. Over the 13 years each truck’s load has weighed an average of 7.3-tons, with one of them – fitted with a tag axle – generally loaded to about 10 tons. The trucks usually do four or five round trips a day, travelling a combined distance of 500-600km between 07:30 and 16:30.
Adrian Nunn, the managing director of Viva Access Scaffolding, bought the trucks new from Honeydew Hino in 2005 and says they are still performing so well and remaining competitive in terms of operating expenses that he does not find it necessary to replace them.
“A good indicator of the durability of these Hino trucks is that when we shared a depot with another company using trucks for similar work that company replaced its trucks, which were of another brand, three times while our Hinos kept on working reliably,” commented Nunn.
He says the reason he chose Hino trucks when he set up Viva Access Scaffolding was the excellent service provided over many years by a Toyota Dyna in his father’s construction business in Pretoria.
“I must say these two Hinos certainly deliver on all fronts as we cannot afford downtime. Carrying heavy loads most of the time and often operating in heavy traffic in urban areas put a big strain on the clutches, so they are replaced approximately once a year. Brake overhauls every two years or so are the only other major maintenance work required to keep the trucks running reliably.
“I am amazed at the strength of the transmission components as the laden trucks usually operate on uneven surfaces at building sites where they often encounter wheelspin, which puts heavy loads on the gearboxes, driveshafts and rear axles, but they continue to prove they are up to this type of heavy work,” explained Nunn.
The trucks have dedicated drivers, with Nathaniel Muvhango having driven the tag axle Hino since it was new, while Clarence Madau has been driving the other truck since 2014.
Major servicing was carried out by Hino Honeydew initially, but a change in the siting of the Viva depot has meant they now go to Hino Midrand for any major repairs.
Viva Access Scaffolding, which was founded in 2003, is a thriving business, with a stock of 900 tons of scaffolding components and many loyal customers, including Bantry Construction, Iguana Construction and Group 5.
Adrian Nunn, one of the founders of Viva, qualified as an architect before joining his father’s business, John Nunn Construction, and deciding to concentrate on scaffolding. Over the years he bought out his partners and for the past nine years he has been the sole owner of the company, ably assisted by his long-time colleague, Chris Levy, who has wide-ranging experience in many aspects of the construction industry.
The company now employs 100 people – many of them having been with the company for more than 10 years – and operates on as many as 30 building sites at any one time.
“Our business is highly competitive and very service oriented, so I am grateful to have the two Hino trucks still running reliably as our customers have very specific requirements that need to be met timeously,” concluded Nunn.