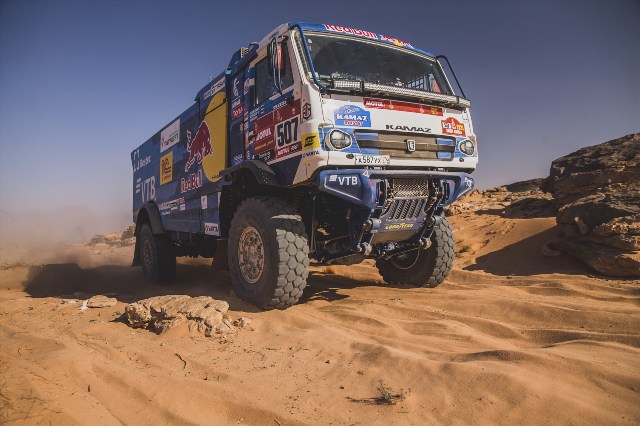 The KAMAZ-master factory team once again won the toughest rally in the world, the Dakar. Not only did they win the 12-day rally-raid for the 18th time, but also managed a full TOP 3 podium win, breaking more than one record with Goodyear as their official tyre partner.

It is Dmitry Sotnikov’s first Dakar Gold since he first started racing the Dakar in 2014. Together with co-driver Ruslan Akhmadeev and mechanic Ilgiz Akhmetzianov, Crew N° 507 took the lead as of Stage 1 and never left the leading position in the general rankings obtaining five out of twelve stage victories during the 2021 edition.

Anton Shibalov of crew N° 501, reconfirmed his Dakar Silver for the second time in a row just 00H 41’ 38” behind teammate Sotnikov.

One of the ingredients to the success of the KAMAZ-master crew is their magnanimous team spirit. Although the impressive blue trucks will go full blast to bring home the next stage victory, their crews will not show any competition amongst themselves. The team has one clear joint objective, get a KAMAZ-master truck on the highest level of the Dakar podium at the final finish, or ideally, a full TOP 3 as they proved this year.

The Dakar is labelled by many competitors as the toughest rally in the world and this year’s edition was no different. “The Dakar can never become a routine event and demands meticulous preparation, disciplined clockwise operations and outstanding teamwork. Trucks, driving and navigation skills, and the expertise of the mechanics were repeatedly tested as never before in the Dakar 2021. The smallest detail had to be attended to and the team worked day and night to achieve this remarkable result.” explains Vladimir Chagin, team manager of KAMAZ-master. “Even in these extreme motorsport marathons, every second counts during the stages. Besides our advanced in-house developed truck technology, there is one vital part to keep the crews going, robust tyres. Speed is of the essence; however, uptime is even more important in order to stay ahead of the competition. With Goodyear as our trusted tyre partner, our teams count on the extraordinary durability and excellent traction of the standard Goodyear OFFROAD ORD tyres to support them getting victoriously to the next finish line, no matter how unexpected the circumstances or how big the challenge is” concluded Chagin.

“Warmest congratulations to the entire KAMAZ-master team. Obtaining Gold, Silver and Bronze in the Dakar truck segment is an astonishing achievement and showcasing the outstanding race expertise of the team and technical mastery of these trucks and their equipment.” says Maciej Szymanski, Marketing Director for Goodyear Commercial Europe. “Without any doubt, the performance of our tyres was tested to the maximum being the only touchpoint to this year’s entirely new route. Their robust durability, cut resistance and enhanced traction are key to the immaculate performance of the team, in the same way as we support today’s demanding transport operations of our customers.”