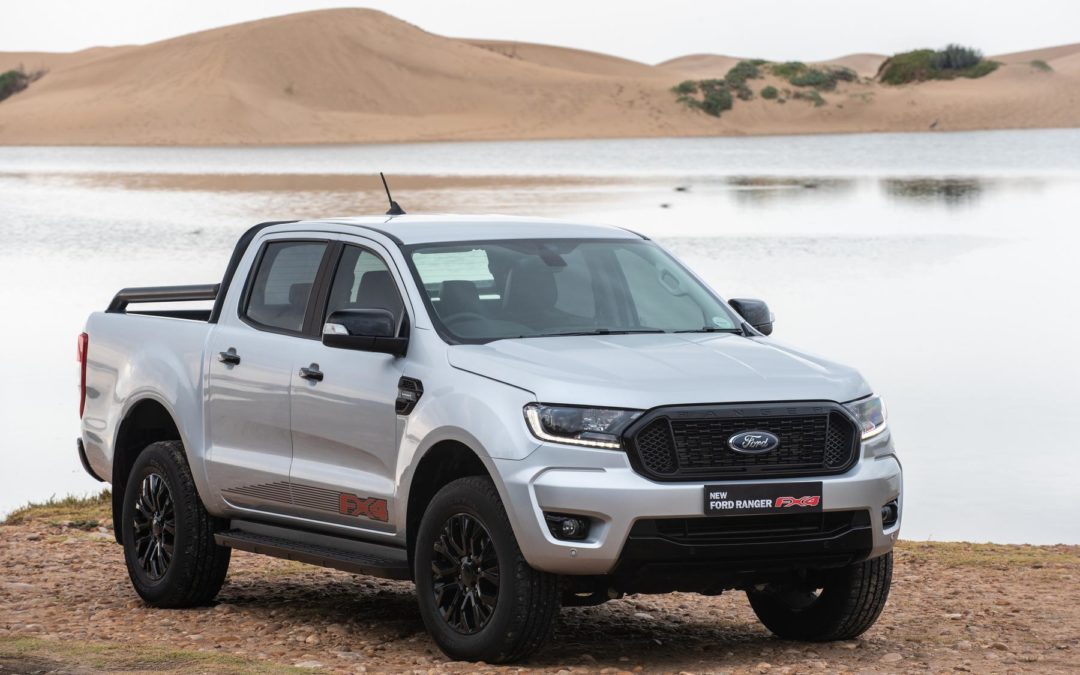 Ford South Africa has added an alluring combination of distinctive style and innovative connected technology to its Ford Ranger line-up with the launch of the new Ranger FX4.

Based on the popular 2.0-litre Single Turbo XLT Double Cab, the Ranger FX4 is available in 4×2 and 4×4 derivatives, offering exceptional capability, unrivalled fuel economy and a superb range of design and functional features – including FordPass Connect which makes its debut on the FX4, and is now standard fitment on all new Ranger XL, XLS, XLT, Wildtrak and Ranger Raptor models.

“Following the remarkable success of the Ford Ranger Thunder, it’s clear that there is great demand among South African buyers for exclusive, value-added derivatives that offer a premium level of style and features, particularly in the important and rapidly growing leisure-oriented pickup segment,” says Neale Hill, MD of Ford South Africa. “The FX4 broadens our Ranger line-up, which is produced at our Silverton Assembly Plant in Pretoria. It offers a distinctive new model for discerning, lifestyle-oriented customers.”

The FX4 badge was first introduced on Ranger in South Africa in 2017 as a limited series, and the new model further raises the bar while building on the ‘Built Ford Tough’ DNA that defines the Ranger, which is locally assembled for domestic sales and export to over 100 markets globally.

“The attractive new FX4 also spearheads the introduction of FordPass Connect which adds a wide range of connectivity services to the Ranger line-up,” Mashinini adds. “FordPass Connect allows customers to access and control a number of vehicle features remotely via the FordPass app on their smartphone, bringing an entirely new level of innovation, functionality and convenience to the segment.

The rear load compartment boasts several FX4-specific enhancements too, most notably the tubular sports bar with extended legs that gives this Ranger an even sportier demeanour, while adding further practicality to the load box – particularly for carrying bicycles, canoes or other gear for sporting or working applications.

A drop-in bedliner protects the bin from damage during everyday use, with six cargo tie-down points provided for securely fastening loads being hauled. A practical 12-volt power socket is provided in the bedliner, which is ideal for powering a portable fridge or other accessories. Two further 12-volt sockets are located in the front of the cabin and an additional socket is provided for rear-seat occupants. The Ranger’s innovative Easy Lift tailgate remains one of the vehicle’s most useful features, allowing the tailgate to be easily lowered or raised with minimal effort.

Echoing the exclusive design elements that characterise the exterior of the Ranger FX4, the upmarket cabin incorporates a soft-touch leather-trimmed dashboard with red stitching, with this sporty theme also carried through to the leather steering wheel, gear lever and seats. Embossed FX4 logos on the front seats add a further splash of dynamic flair.

As with the existing Ranger XLT derivatives, the FX4 is powered by Ford’s impressive 2.0-litre Single Turbo diesel engine, which produces 132kW of power and a substantial 420Nm of torque. It is matched to Ford’s advanced 10-speed automatic transmission, which offers conventional automatic, sport and manual shift modes.

Additionally, the Progressive Range Select (PRS) function gives the driver the ability to lock out gears from the automatic shifting range simply by pressing the ‘+’ or ‘-’ buttons on the gear lever. This offers greater control to suit specific driving conditions – such as when towing or climbing steep gradients, for example.

The Ranger FX4 can be specified in 4×2 or 4×4 models, both of which are equipped with an electronic differential lock as standard. The 4×4 derivative gains shift-on-the-fly engagement of the four-wheel drive system, along with Hill Descent Control.

The Ranger FX4 is equipped with a full complement of airbags to protect the occupants in the event of a collision, including dual front, side and full-length curtain airbags, plus a driver’s knee airbag. Secure anchorage points are fitted to mount ISOFIX-equipped child seats.