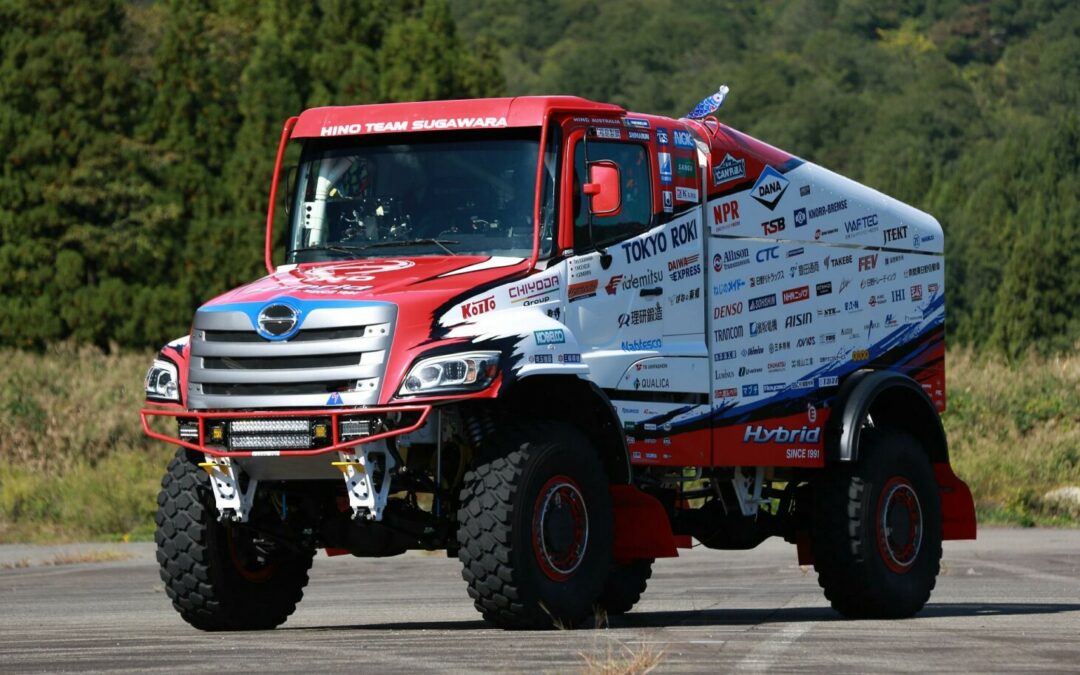 Hino Team Sugawara has conducted extensive testing of the 1 000 hp hybrid truck it has entered in the 2022 Dakar Rally. Results have been very promising as the team aims to take on the so-called “monster trucks” with Hino’s first racing diesel-electric hybrid powertrain. This event, which is considered the most gruelling motorsport event in the world, will take place in Saudi Arabia from January 2-14.

The Hino that will race in the 44th edition of this famous rally-raid is the bonneted 600-Series which is sold only in North America. Under the skin it is like the 500-Series which is a consistent strong seller in Hino South Africa’s product range.

This bonneted truck competed in the 2020 race but had to retire due to safety concerns when an accident cracked the roll-over bar. It has not only shed weight, but has a different drive train, with the 9-litre six-cylinder turbocharged diesel engine now developing 790 bhp (588 kW) compared to the 738 bhp (550 kW) available in the 2021 Hino racing truck.

However, the significant difference is the hybrid capacitor electric propulsion system that adds a further 276 bhp (206 kW) to the power output, making a combined 1 065 bhp (794 kW). Drive goes to all four wheels via an instant-shift racing six-speed automatic transmission with a Hi-Lo switch and centre differential lock.

“We fine-tuned the powertrain settings as well as the suspension system during extensive test running in October and made big improvements to the truck’s acceleration and overall performance, which is most encouraging,” commented Teruhito Sugawara, the Team Director and driver. “I am looking forward to see how well we will now be able to compete against our rivals with much larger capacity engines.”

Teruhito Sugawara will have Hirokazu Sumemiya as his co-driver and Yuji Mochizuki as a travelling mechanic.

The 2022 Dakar has attracted one of its biggest truck fields in recent years, with 60 trucks from 12 manufacturers entered. Once again Hino is the only Japanese truck manufacturer taking up the Dakar challenge, with all the other trucks coming from Europe. The 2022 field consists of MAN and Iveco (17 each), DAF, Kamaz, Tatra, (4 each), Renault, Maz, Scania (3 each), Mercedes-Benz (2), and Hino, Praga, Ford Cargo (1 each).